Ready to die? Experience the newest brutal action game from Team NINJA and Koei Tecmo Games. In the age of samurai, a lone traveler lands on the shores of Japan. He must fight his way through the vicious warriors and supernatural Yokai that infest the land in order to find that which he seeks.

The Complete Edition contains the full game, as well as the three expansions with additional story chapters: Dragon of the North, Defiant Honor, and Bloodshed's End. 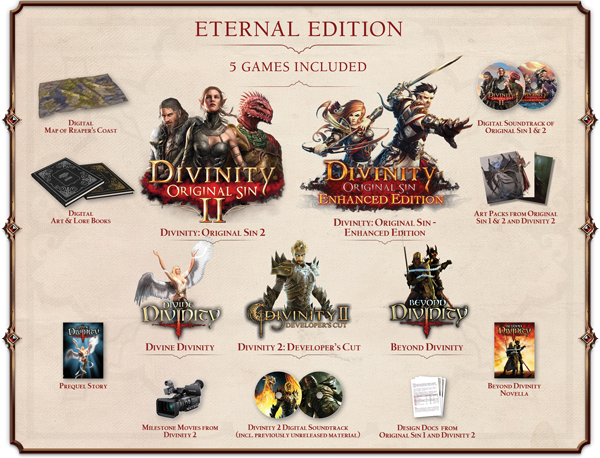 The Divine is dead. The Void approaches. And the powers latent within you are soon to awaken. The battle for Divinity has begun. Choose wisely and trust sparingly; darkness lurks within every heart.

Who will you be?

A flesh-eating elf; an imperial lizard; an undead risen from the grave? Choose your race and origin story - or create your own! Discover how the world reacts differently to who - and what - you are.

It’s time for a new Divinity!

In RUNNING WITH RIFLES: PACIFIC, you jump back in time to the Pacific theater of World War II, to witness the epic clash between the Imperial Japanese Army (IJA) and the United States Marine Corps (USMC) - fighting over tiny specs of turf you've never heard of.

Battle with the enemy over islands carved into history - Guadalcanal, Tarawa, Saipan, and

Welcome to Hanwell, once a safe haven from the horrors of the world, now a cesspit of anomalous scum. Explore a dense open world of terror, every building a unique location with it's own story to tell. Strung together by the remenants of Hanwell.

There is something deeply unsettling about Hanwell. Unexplained noises, something in the corner of your eye or laying just beyond the shadows create an atmosphere that will keep you constantly on edge.

An alchemist's apprentice returns home from university to finish her training under a great master. Little does she know a real paranormal adventure has only just begun.

EXPERIENCE A FANTASTIC TALE OF DECEPTION AND INTRIGUE! Things go awry when she revisits her family home, where dark secrets and the mystery of her parents' disappearance lie buried.

INVESTIGATE THE SECRETS HIDDEN IN THE SHADOWS OF THE THRONE! She encounters a mysterious vigilante and finds a mysterious amulet. To learn the wisdom

The Evil Within 2-CODEX

The Evil Within 2-CODEX

From mastermind Shinji Mikami, The Evil Within 2 is the latest evolution of survival horror. Detective Sebastian Castellanos has lost it all. But when given a chance to save his daughter, he must descend once more into the nightmarish world of STEM. Horrifying threats emerge from every corner as the world twists and warps around him. Will Sebastian face adversity head on with weapons and traps, or sneak through the shadows to survive.

Tales From CandleKeep Tomb Of Annihilation-SKIDROW

Tales From CandleKeep Tomb Of Annihilation-SKIDROW

Tales from Candlekeep: Tomb of Annihilation, a turn-based dungeon-crawling game based on the Dungeons & Dragons Adventure System board games.

On the deadly peninsula of Chult, an adventuring party must fight their way through dangerous jungles, labyrinths and dungeons to find and reverse the cause of the death curse. Choose to play as one or more of the four adventurers (Artus Cimber, Asharra, Birdsong, and Dragonbait)

Juliette Waters wakes up in an empty apartment from the seventies, buried underground by a landslide. With the help of her ghost recording equipment she manages to escape and make contact with Walter, the owner of a local boat business. She learns that her boyfriend Jonathan is looking for her, and she decides to look for him too. She borrows Walter’s boat to travel the flooded landscapes of Saginaw Park, and heads for the coordinates written down on a post-it note stuck to the ship’s computer.

THE ORIGINAL BULLET-HELL IS BACK!

Arcade hit Raiden first left its mark on the shooting genre 25 years ago. The easy to learn, hard to master series comes to the PC in its most modern and advanced form yet! Join the war for Earth's future-where the tide of battle holds constant surprises.

Take Off The Flight Simulator-SKIDROW

Take Off The Flight Simulator-SKIDROW

Fly more than 20 airplanes in an open world or try out more than 40 excitng and varied missions – from airfreighting to dramatic rescue operations! You can also establish your own airline and fly to cities such as New York, London, Sydney and 18 other destinations. Fly the most popular models of planes, such as jumbo jets, seaplanes and a military jet with realistically designed 3D cockpits. Experience challenging weather conditions and try to land your